Anna King is a Scottish contemporary landscape painter, a graduate from the Duncan of Jordanstone College of Arts, Dundee. She first came to the notice of the general public during her degree show in 2005, selling out her exhibition of graduate work. Since then she has won the 2007 inaugural Jolomo Lloyds TSB Landscape Award, a 20,000 prize being the largest privately funded art award in the UK, the Anne Miller Scholarship and a Royal Scottish Academy Landscape Award. She has also developed her work though the award of residencies in the UK, France and Iceland.

King's work is inspired by the human mark that is left on the land around us, as she puts it herself, her work explores the margins of landscape. She works in oil paints on paper and board, drawing in to the wet paint with pencil. This technique results in a deconstructed, sketch-like finished piece. The smooth surface, fragility and fluidity of the mark making on paper echoing the temporary and peripheral nature of the places she visits to paint.

The subjects of her work are the result of journeys to places where man has existed, departed and left their mark. Be it a disused quarry, abandoned building or former plantation, King is fascinated by the beauty of decay and nature's reclamation of our forgotten past. By concentrating on nature's unconcerned regard for our presence on the land, her works remind us and bring into focus the transience of our own existence.

Her artistic confidence is so very evident in her work yet there is a delightful sympathy in the finished pieces that offer up a very real sensitivity; creating a distinctly soulful connection to her subjects.

Anna was born in Shetland in 1984 and now lives and works in the Scottish borders. 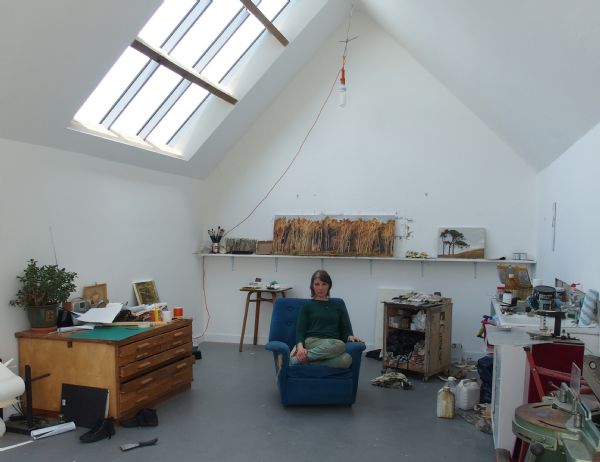 'From wastelands and derelict sheds to field edges and patches of scrub, I've always been interested in the places where man and nature meet - the overlooked and unloved margins of our landscape. Most recently I've become fascinated by forestry clear fell sites, painting the strips of native trees left silhouetted along the boundary or on the edge of a felled forest clearing with pale bone-like trunks and limbs set against an impenetrable wall of spruce. I love these spindly and resilient trees, forced into unusual shapes by their fight for light and room to grow - for me they perfectly illustrate that clash of nature and industry that I find so interesting.

I work in oil on paper pasted onto board, drawing into the wet paint with pencil and metal tools. Drawing is an integral part of my paintings - I love combining washes and slicks of oil paint with fluid lines. The result is a sketch-like finished work, the fragility of the marks on paper echoing the temporary and peripheral nature of the places I paint.' 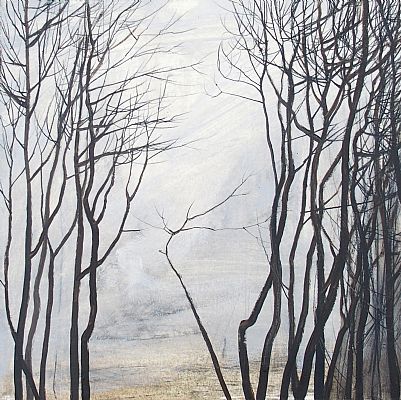