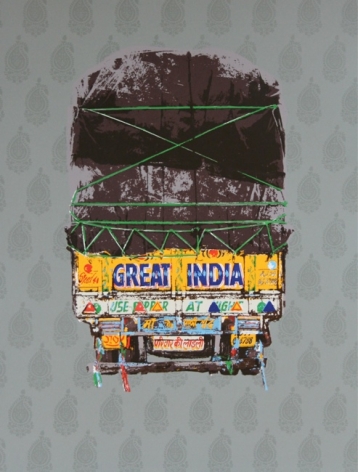 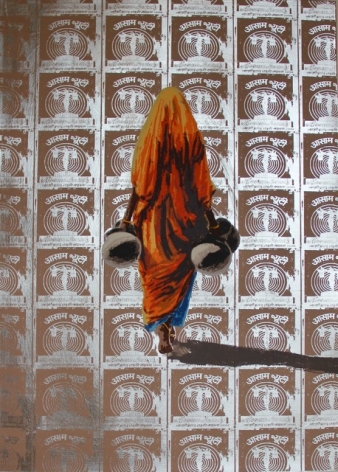 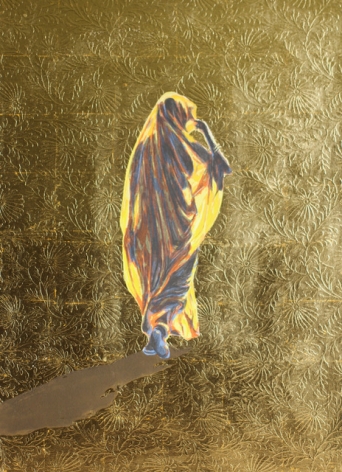 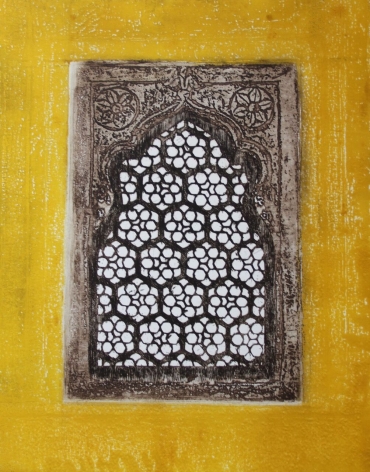 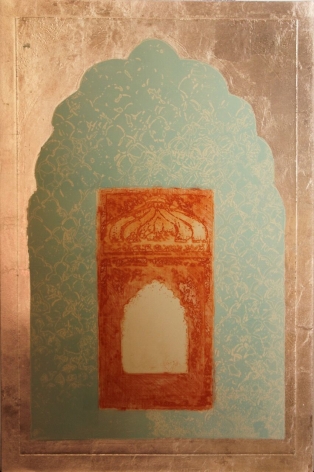 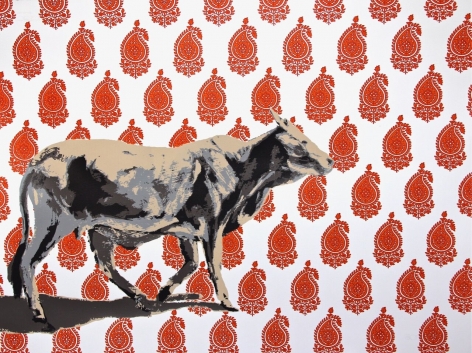 Written By Gill Sutherland, Arts Correspondend for the Stratford Herald 15/03/2019.

Last Saturday I popped over to India. I saw some sights, marvelled at the architecture, heard the strains of a strummed sitar, felt the warmth and breathed in the aromas of that far-off land. All while I was in an art gallery in Sheep Street, Stratford.

My journey — all in the imagination obviously — is testament to the power and beauty of artist Natasha Kumar’s work, which is currently on exhibition at The Stratford Gallery.

An Indian heritage from her father gave Natasha the key to a treasure box of images, colour and experiences that is the source for much of her work. She began with drawing and printmaking, a way to make her mark in a noisy family of established painters — her grandfather was the painter Peter Todd.

Natasha explains: “I am half-Indian so it’s there in my genes and also my soul. One of my earliest memories is of being in Mumbai, and seeing the image of a strange blue face – which must have been Krishna — painted on a turquoise wall. I remember being frightened by it, but also curious. That curiosity about India has remained with me, and has become my inspiration as an artist.”

After taking a foundation course in printmaking, three of Natasha’s prints were included in the highly prestigious Royal Academy Summer Exhibition. From there it was a first for her Manchester degree, taking an extra year to study anatomy and printmaking at the Venice School of Art. Following a successful first solo show in Sheffield, she moved to London to start a Masters in printmaking at Camberwell in 2000. Regular shows, from the Affordable Art Fair to Art Expo New York, confirmed demand for her prints, but before long the family painting genes began to assert themselves.

Paint, print, etching and gold leaf are combined in Natasha’s work to create gobsmackingly gorgeous depictions of India. But her work is more than just picturesque. She paints India in its complicated beauty — she explains what visitors can expect to see in the exhibition: “Colour above all, for the mood and feelings of India it evokes. Colour is an essential part of life there, in vivid, hypnotising combinations, but loaded with meaning too. The sensuality of red for weddings; life and happiness in green, black kohl around a baby’s eyes for spiritual protection -– half the fun for me is finding the colours that work.”

She continues: “Indian architecture has always been part of my art: intricate stone fretwork jali windows, crumbling palaces, eerie step wells descending like endless Escher staircases, but above all the chhatri, a quintessential North Indian motif. I love the shape, it means umbrella or canopy in Hindi. They’re loaded with cultural significance and resonate with memory and stories. There’s a stately exuberance there too, if such a thing exists.”

As I browse round the gallery I am taken by the ‘Indian woman series’ – the women are depicted from the back, their veils capturing sunlight, against a background of intricate mosaics. The images are stunning, I want one for my wall!

Natasha perfectly explains the allure of the series when she says: “Without realising it they had become part of a personal artistic exploration of my heritage, and theirs. In each painting I was asking the great question ‘what can I know of their lives, that might have been mine?’”

Full of praise for the owners of The Stratford Gallery, Emma and Howard Clegg — who she says have a genuine ethos, and pick artists of high calibre – Natasha is also very complimentary about Stratford. “It’s where I fell in love with the theatre as a youth,” she says. “So there’s a whole thing for me about coming back here as an artist. I feel actors and artists fight the same fight.”

And thanks to Natasha for bringing a bit of Mumbai magic to our hometown!